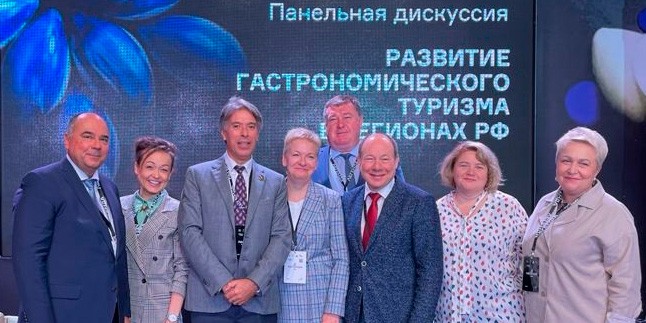 The president CEO of the Global Wine Tourism Organization (GWTO) José Antonio Vidal, got Russia despite all the difficulties of traveling during the pandemic. The main purpose of his visit was to hold meetings with representatives of the russian public, private and academic sectors.

Mr. Vidal’s trip started in the city of Perm (Ural region), where he participated in the Russian Culinary and Services Olympiad «Legend». Chefs from all over Russia, including regions with great potential for the development of wine tourism, took part in the Culinary Olympiad.

The opening ceremony was attended by Governor of Perm Krai, Dmitry Makhonin, the president of the National Culinary Association of Russia, Victor Belyaev, and Leonid Gelibterman, GWTO Director for Central EurAsia region and president of the russian International Center of Wine and Gastronomy. In the opening ceremony, José Antonio Vidal said: “On behalf of the GWTO I congratulate all participants and organizers of the Olympiad and wish success to the National Culinary Association of Russia. I bring you also greetings and best wishes from Rafael Ansón, Honorary President of the GWTO and President of Honor of the International Academy of Gastronomy”.

Together with Yulia Vetoshkina, Minister of Tourism and Youth Policy of the Perm Krai, and Yulia Rybakova, Adviser to the Head of the Russian Federal Agency for Tourism (Rostourism), José Antonio Vidal took part in the panel discussion ‘Development of gastronomic tourism in Russia’, moderated by Leonid Gelibterman, in which Mr. Vidal stressed that “wine tourism -matching with gastronomy proposals- is the real motor for agritourism destinations”, offering GWTO support for its socio-economic development.

José Antonio Vidal gave as well a master class about wine tourism for professors and students of the Higher School of Economics, one of the leading universities in Russia with campus in Perm, Moscow and Saint Petersburg.

GWTO president had a useful and important meeting with the Minister of Tourism and Youth Policy of the Perm Krai, Yulia Vetoshkina, who appreciated the potential of cooperation with the GWTO for the development of agritourism in the Perm Region, planning to include in the next meeting the Ministers of Culture and Agriculture, as well as the academic sector of Perm. As a joke -but, as we know, every joke has its share of truth-, Ms. Vetoshkina suggested opening a GWTO office in Perm.

From the academic side, the Rector of the Moscow State University of Tourism and Sports, Masyagina Natalia Vasilievna, has also shown her interest in the educational field of the GWTO Academy.

About GWTO
A Global wine, agri and gastro Tourism Business and Knowledge Network, comprising the whole agritourism value chain located in wine destinations -related to ‘wine’ in its broader sense-, the public sector and the academic by GWTO Academy. GWTO has been created to enhance the social-economic development of wine tourism destinations and its residents through strategic value propositions, as part of an inclusive and supportive governance framework, based on the United Nations 2030 Agenda for Sustainable Development Goals.