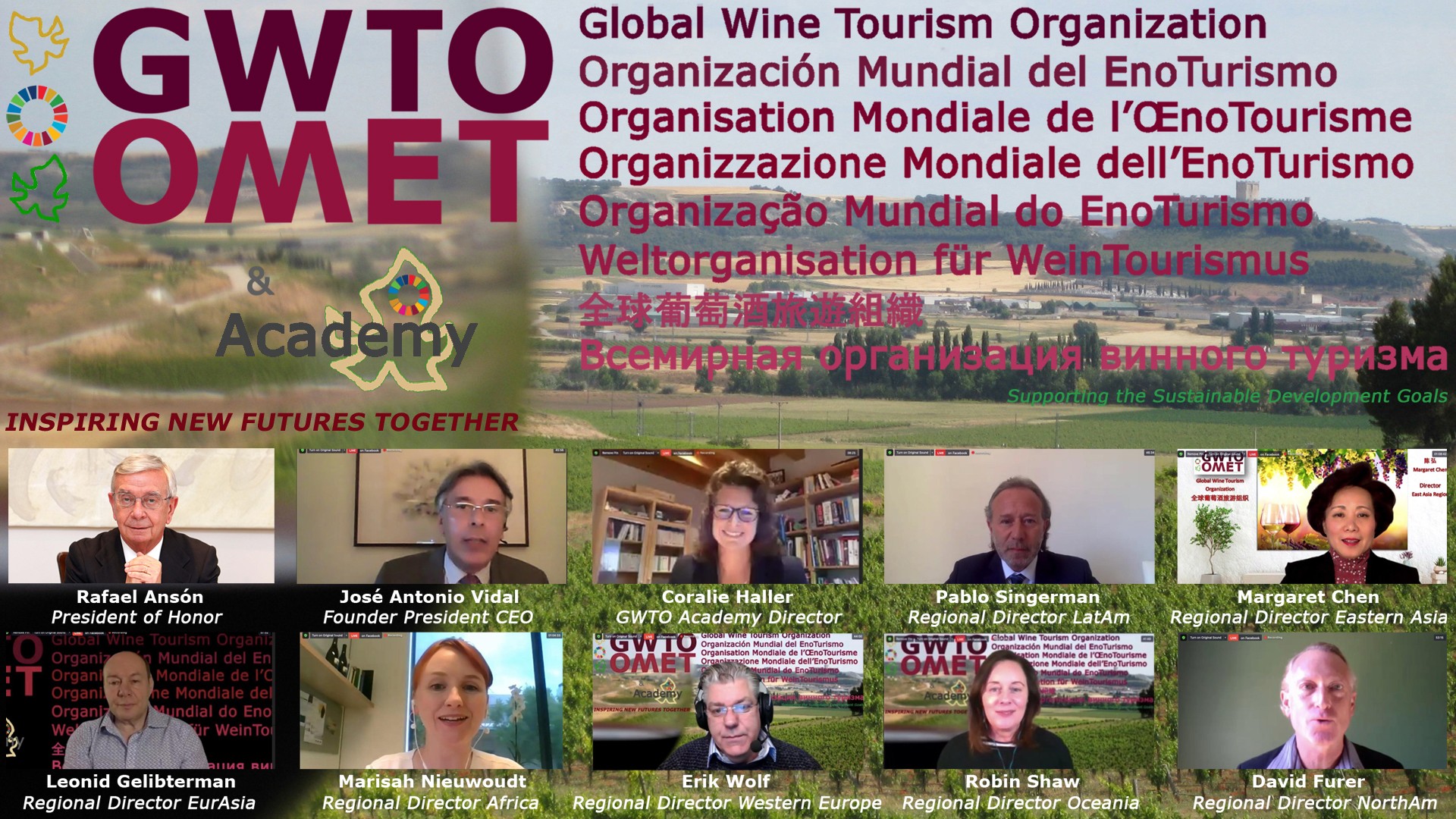 The Global Wine Tourism Organization (GWTO) and its Academy formally presented its Founder President CEO, Regional Directors and the Director of the Academy, via videoconference the GWTO initiative and their roles in the organization.

The Global Wine Tourism Organization community is made up over 50 states, of which 25 offer wine tourism proposals with the rest in the process of doing so, are issuers of wine tourism, or have interests in the sector through indirect stakeholders.

Rafael Ansón, President of Honor:
“The essence of wine tourism is getting to know a region through its wine-making and oenology while admiring its landscape, its architectural jewels and its gastronomy. Wine tourism gains an instrumental importance as an activity revitalizing to the cultural and environmental heritage wherever the wine making tradition is located. I would like to share with you my satisfaction that GWTO has been created to contribute to the social-economic development of wine tourism destinations in an international unifying and collaborative framework.”

José Antonio Vidal, Founder President CEO:
“The dream of the ‘Big World Wine Tourism Family’ begins to become reality today, at a time when globalism has been torpedoed at its waterline: in critical moments, the riskiest proposals are put on the table. Public and private sectors, and the most prestigious academic authorities have evaluated GWTO not only as necessary but also timely: Few business activities have the growth prospects that this sector will have after the pandemic. There is a large window of opportunity linked to the benefits offered by a sector as comprehensive and transversal as wine tourism: we have ahead one of the most inclusive and sustainable Tourist projects ever. We are forced to turn the crisis into a transformative opportunity.”

As Cultural Tourism that we are, GWTO Academy is committed to the development of a new framework of governance aligned to UN Agenda 2030 in terms on Universal respect, Gender and Social Equality, Health and Well-being, Quality Education, Climate, Ecosystems and Partnerships to develop and promote academic research collaborations through the creation and dissemination of knowledge via academic publications in scientific journals and books, publications of case studies, and organization of conferences, supporting the GWTOs’ Economic Monitor and Quality seal, in order to professionalize the sector through specialized training programs, working together with fellows from leading universities and institutions of higher education, specialized in tourism and in agri and gastrotourism.

This will ensure the training of the international wine tourism professionals who will be leading the wine tourism of the future to be recognized as a GLOBAL ECONOMIC INDUSTRY.”

Pablo Singerman, LatAm Director:
“We are going to support and work strongly together with the Public, Private and Academic sectors to consolidate the development of Wine and Gastronomy Tourism in Latin America. The expectation generated by the creation of GWTO and the Academy is enormous, both in consolidated and emerging destinations. Latin America and its experiences of Wine and Gastronomy welcomes the World through GWTO.”

Margaret Chen, Eastern Asia Director:
“Of all the tourists in the world roughly about 25%, or 350 million, tourists are from Asia. Among that figure China alone totaled 140 million in 2019. Asia tourism invests lifestyle, culture  and luxury products. Wine Tourism is in a good moment to help enrich the culture, increase the knowledge, and create good relationship between nations. I foresee an initiative such as GWTO a great success in the near future committed to inclusivity, solidarity, and sustainability as key issues in the New Wine Tourism.”

Marisah Nieuwoudt, Africa Director:
“I am proud to represent the African region in the newly formed GWTO and look forward to exchanging knowledge and best practice with African winemaking countries, like South Africa, Algeria, Morocco and Ethiopia, as well as our GWTO colleagues internationally.”

Erik Wolf, Western & Central Europe Director:
“I am pleased to support the GWTO’s development efforts in Western & Central Europe. Since 2001, when we founded the culinary tourism industry, we have seen first-hand how beverages have played a tremendous role in the development of gastronomy tourism around the world. Wine is a product enjoyed by visitors and locals alike, and holds great potential to make an important economic impact in GWTO’s participating areas.”

Robin Shaw, Oceania Director:
“Wine (and food) tourism is an important driver for travel to and within Australia and New Zealand. I have had the privilege of working with the sector to advance its development since 2003, while also observing the exponential growth of wine tourism globally during this time. It is therefore an honour to be aligned with the GWTO and its vision for world-wide collaboration and innovation in wine tourism.”

David Furer, North America Director:
“José Antonio Vidal’s creation of the GWTO during this worldwide viral pandemic, economic recession, and climate crisis has taken vision and fortitude. I’m pleased and honored to be representing North America while assisting GWTO in its international communications.”

This website uses cookies so that we can provide you with the best user experience possible. Cookie information is stored in your browser and performs functions such as recognising you when you return to our website and helping our team to understand which sections of the website you find most interesting and useful.